The start of the ARC Rally was exhilarating with 190 boats all crossing the start line. There were yachts everywhere, racing yachts up front then the catamarans and then the cruising yachts like us. Fenders or pipe lagging were strapped onto the front of everyone’s bows/anchors so no one hit each other, (yes we were that close), and yet this race is for 3 weeks, not 3 hours! 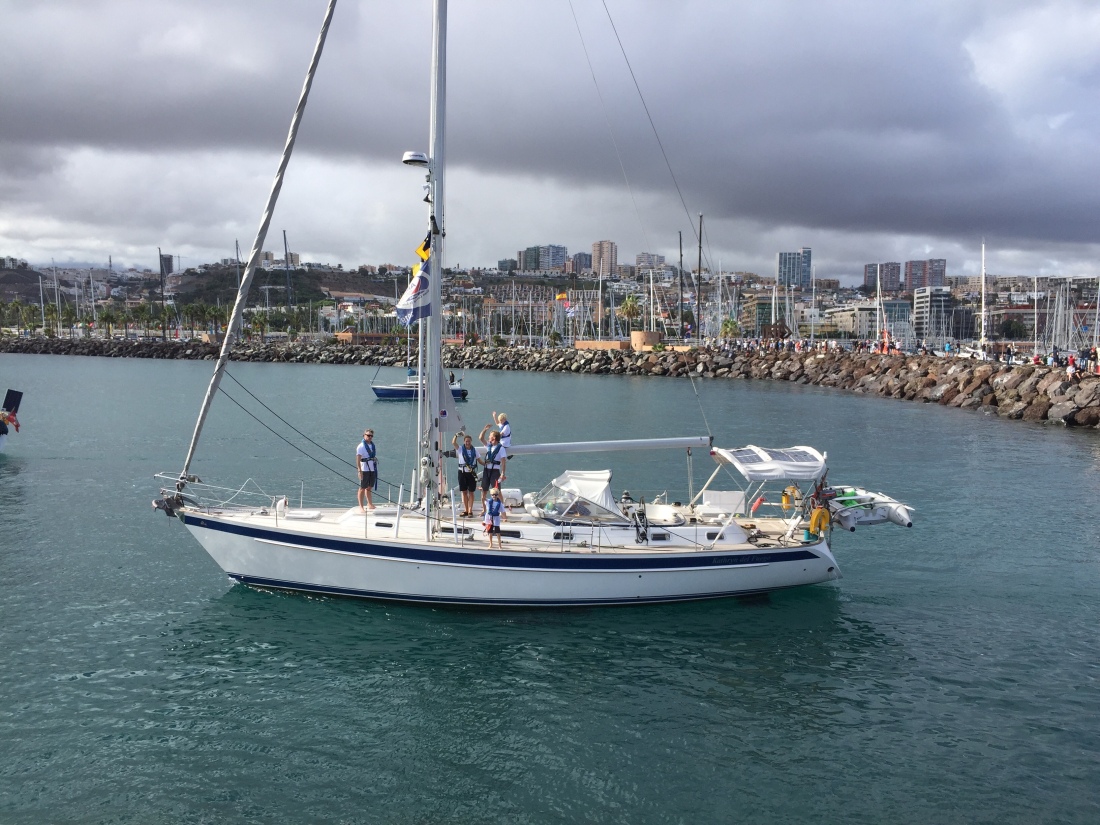 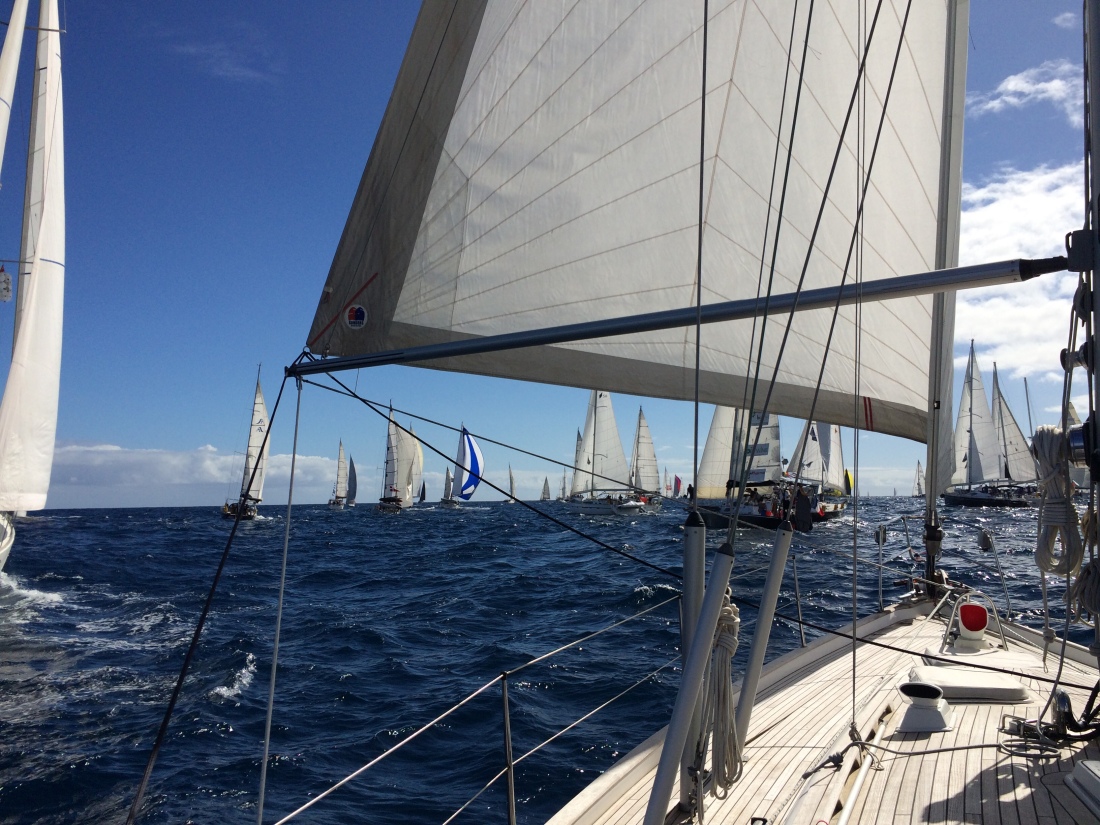 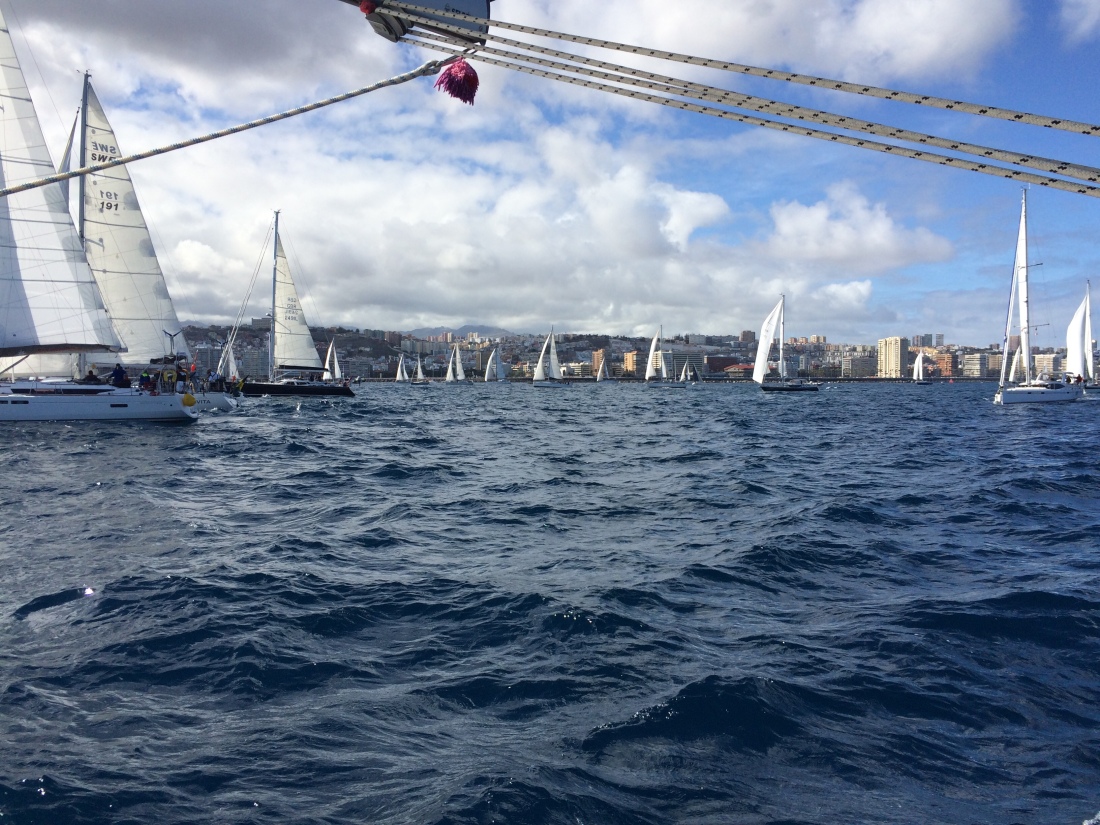 It was pretty choppy and windy and we soon hit the acceleration zone around the island where winds increased by 10+ kts, we were sailing in Force 7 from the start! The first night was busy with a plethora of yachts in very close proximity and it was a hairy night-watch to say the least. We raced on for the next few days with some great winds heading us south towards Cape Verde islands. Amazingly quickly the boats spread out so you could barely see another yacht in the horizon. The AIS started to get patchy too with boats disappearing and then reappearing on our screens. One skipper told us that AIS is unreliable off-shore!!! Not exactly music to our ears.

Soon the wind died much to our frustration and disappointment. We felt it was too early in the journey to be motoring (the fuel was for emergencies in our eyes), so we dropped the dingy, put out a long line and went for a swim! Nothing like swimming with 5000m of Atlantic Ocean below you. It’s pretty unnerving and no one stayed in for long! 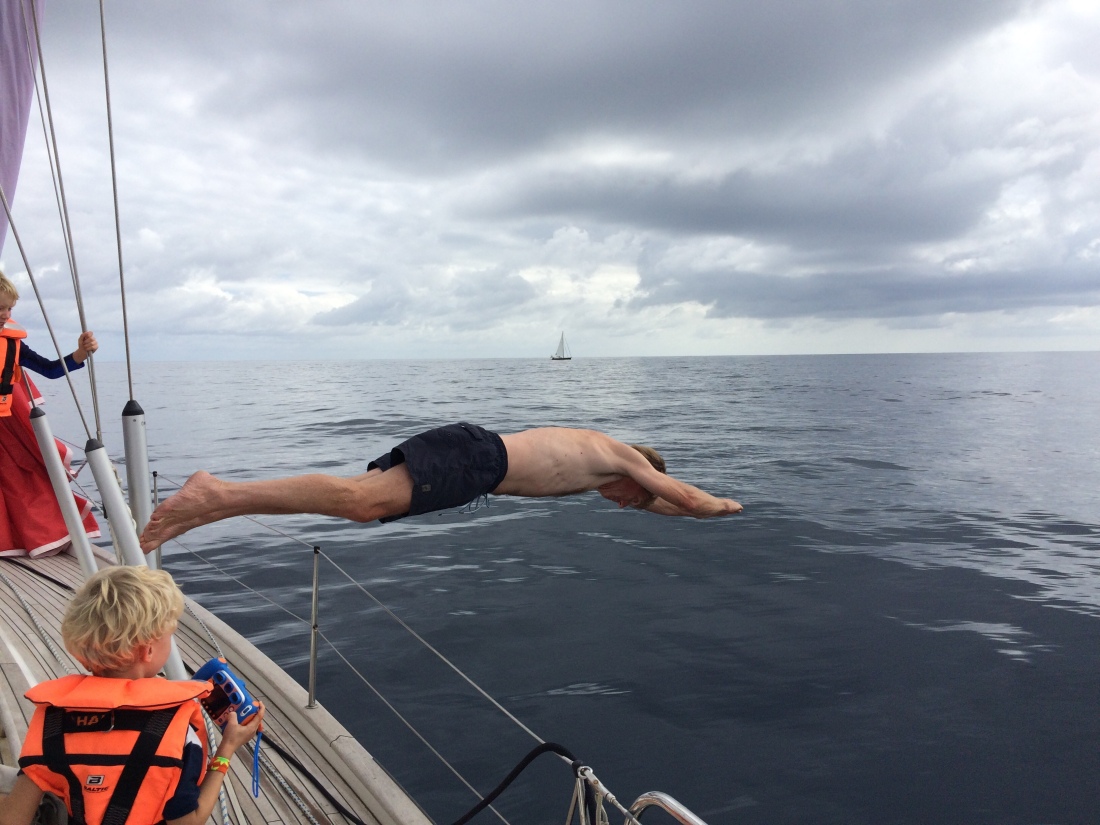 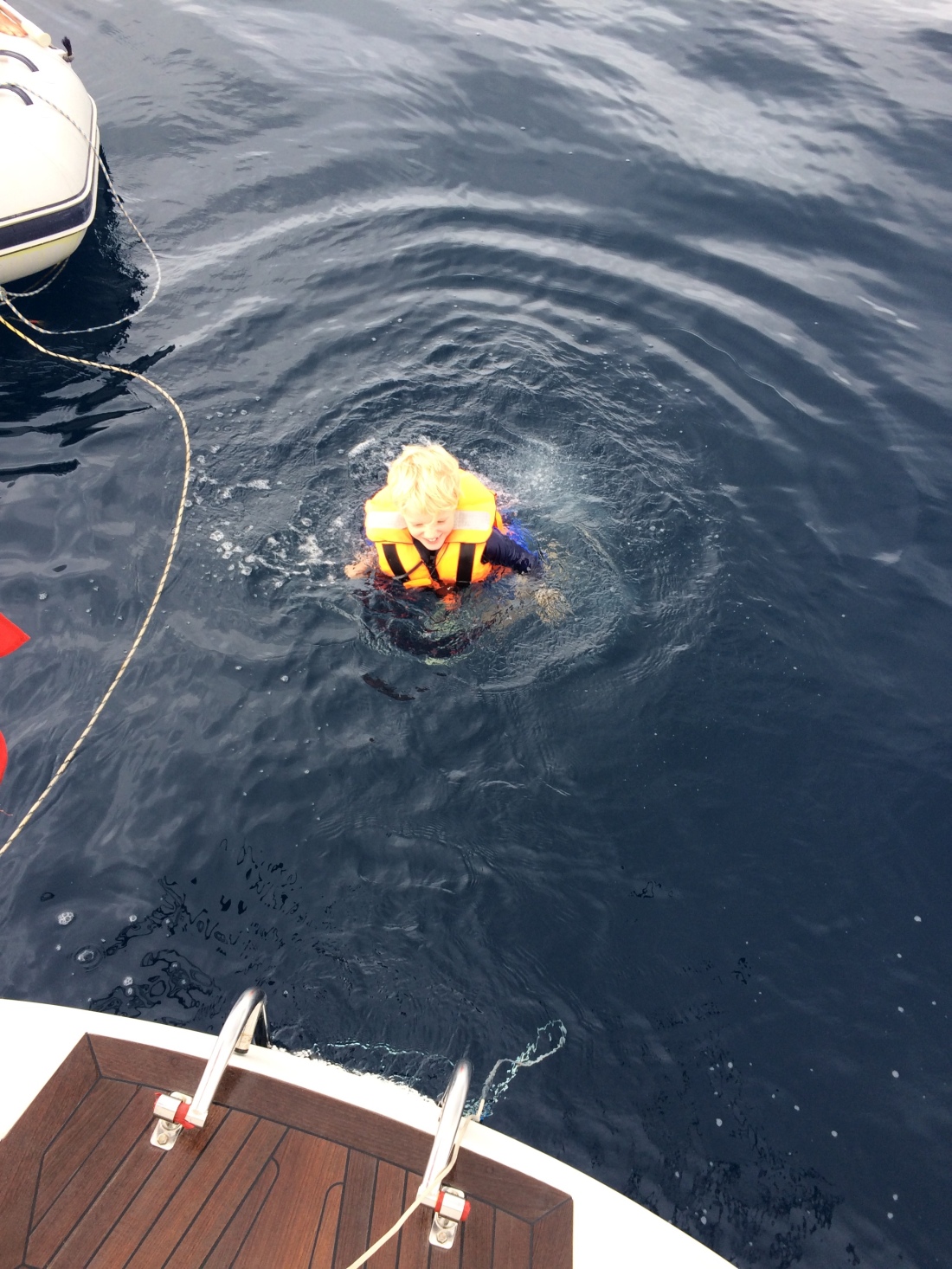 We were treated with a minke whale who came to check us out (very close), I have a video of it swimming below our davits. Also we had shoals of dolphins to keep us company too, so something vaguely good out of flat calm weather. 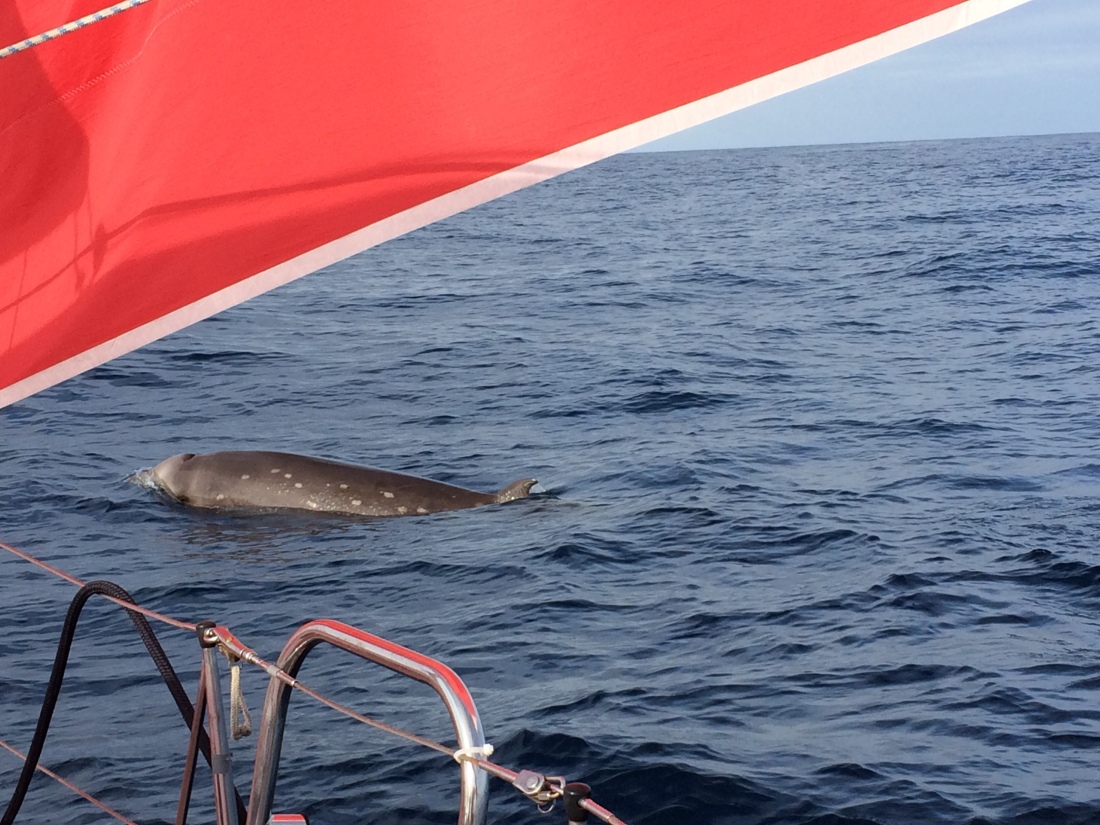 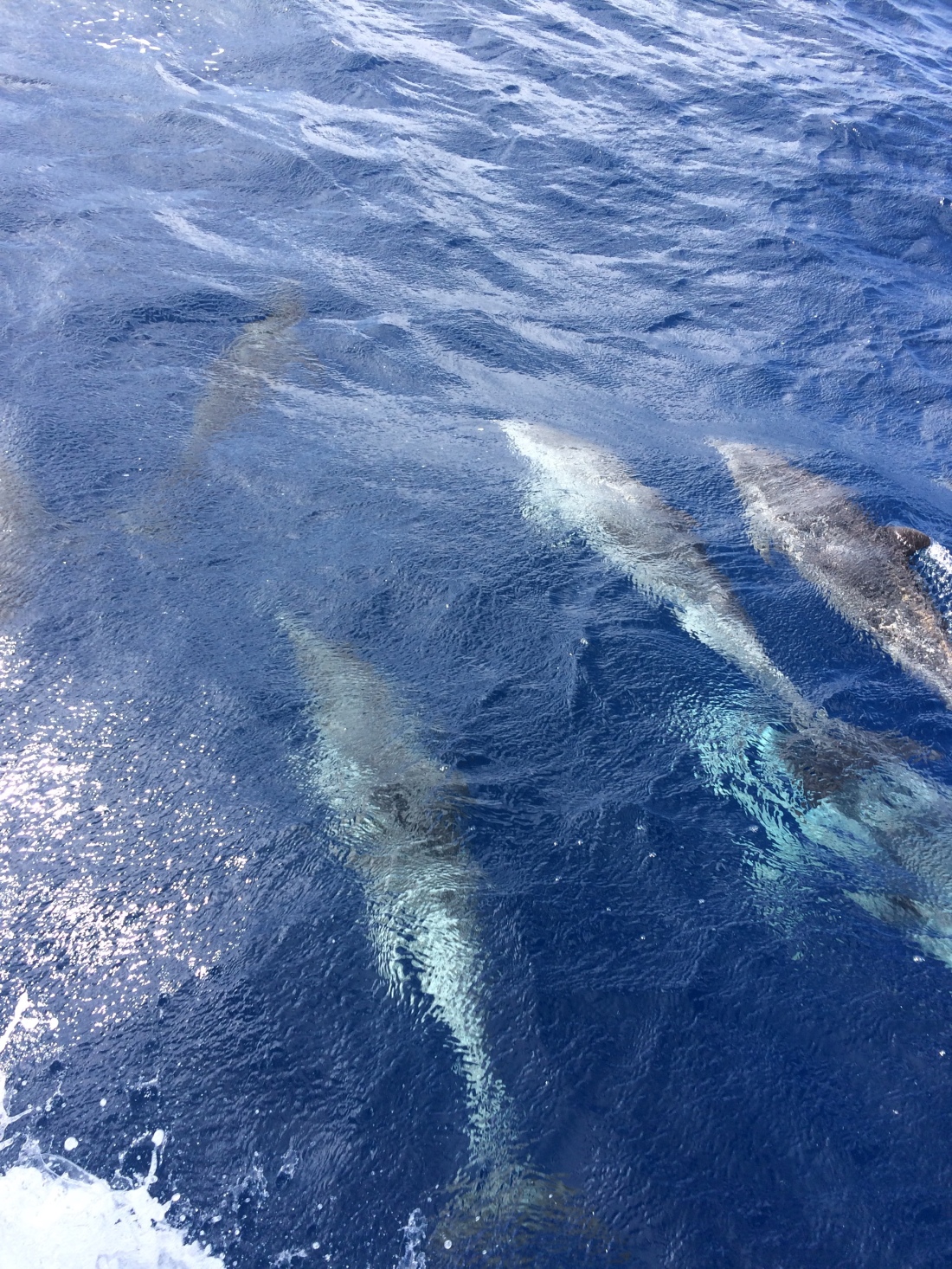 Meanwhile most of the fleet had got fed up with the lack and of wind and motored west to find wind, so we found ourself alone with a few other die-hard sailing-only boats. So that’s why we looked like we were at the back if you followed us on YB races app. But as motoring counts against you in the race, we were actually doing remarkably well and Russell was working hard to keep our speed as high as safely possible at all times, including making us jibe which is hard work with all the preventers and spinnaker pole out. 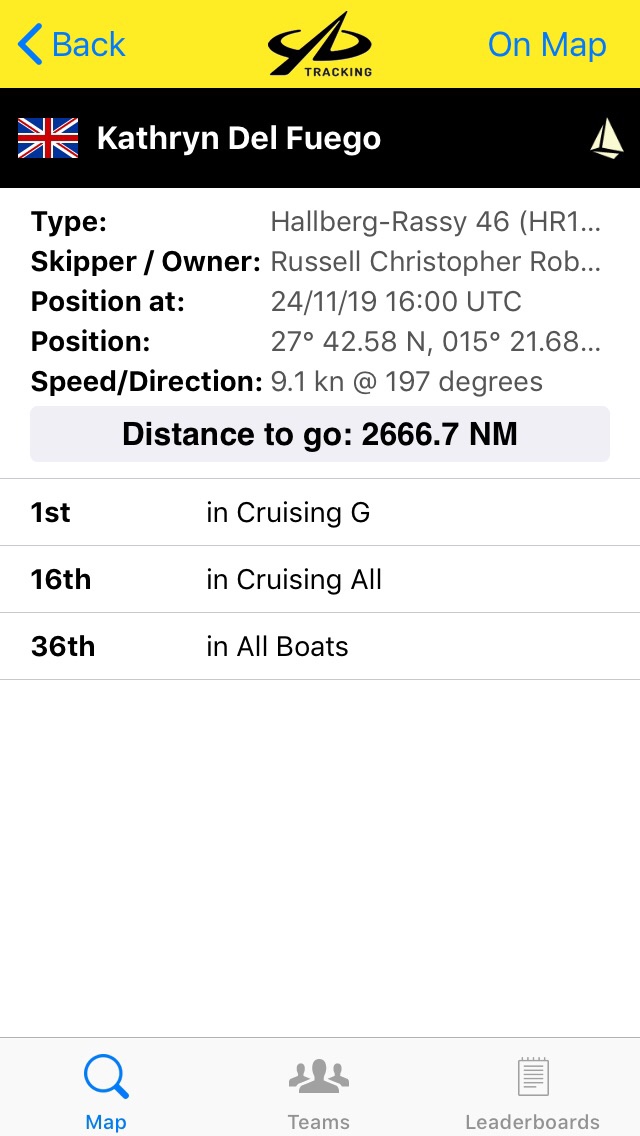 The first week I even got a good routine going with the boys after the first few days namely school in the mornings and games and art/crafts in the afternoon. Cooking was going fine too, definitely feeling positive at this stage! 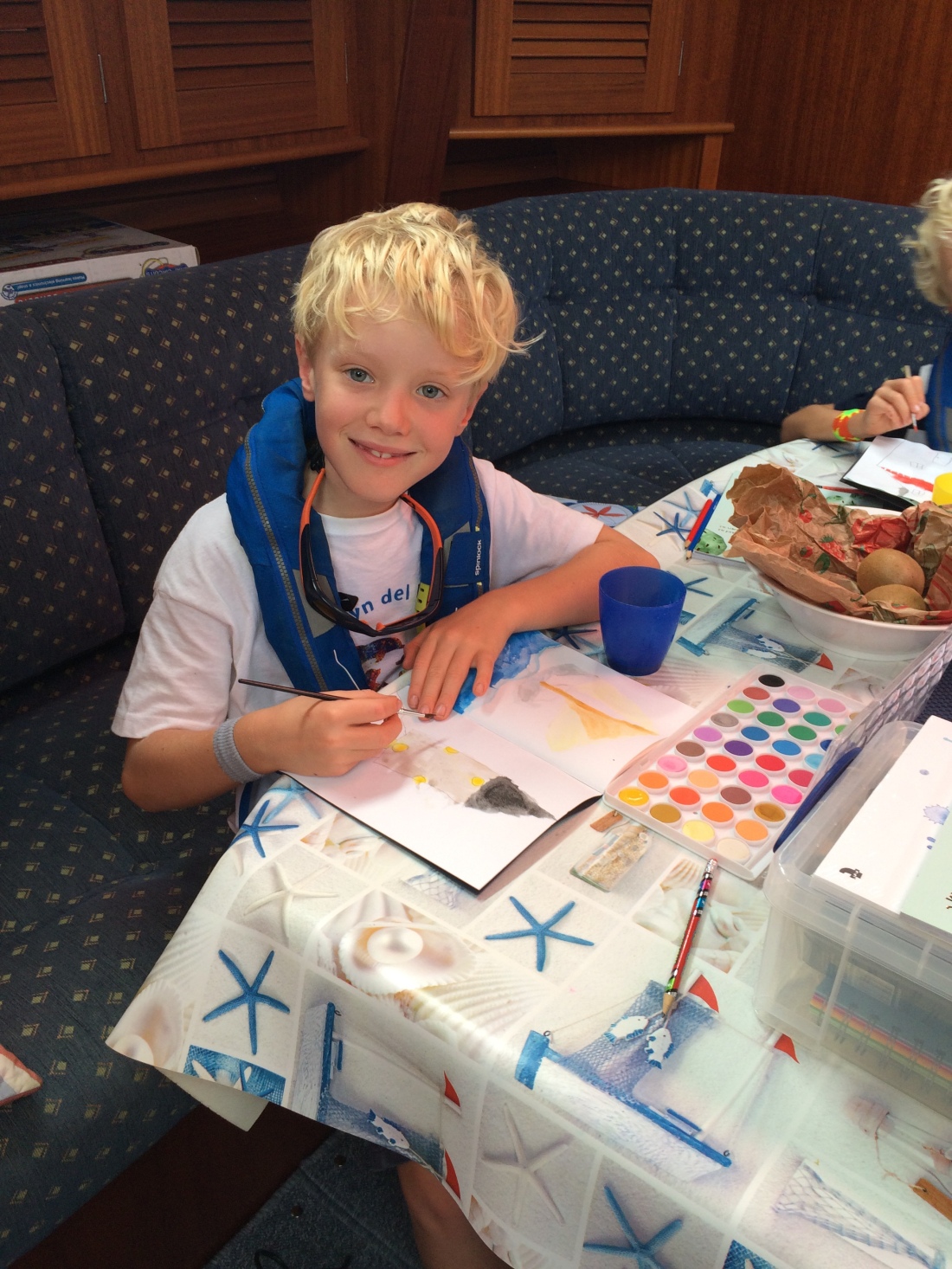 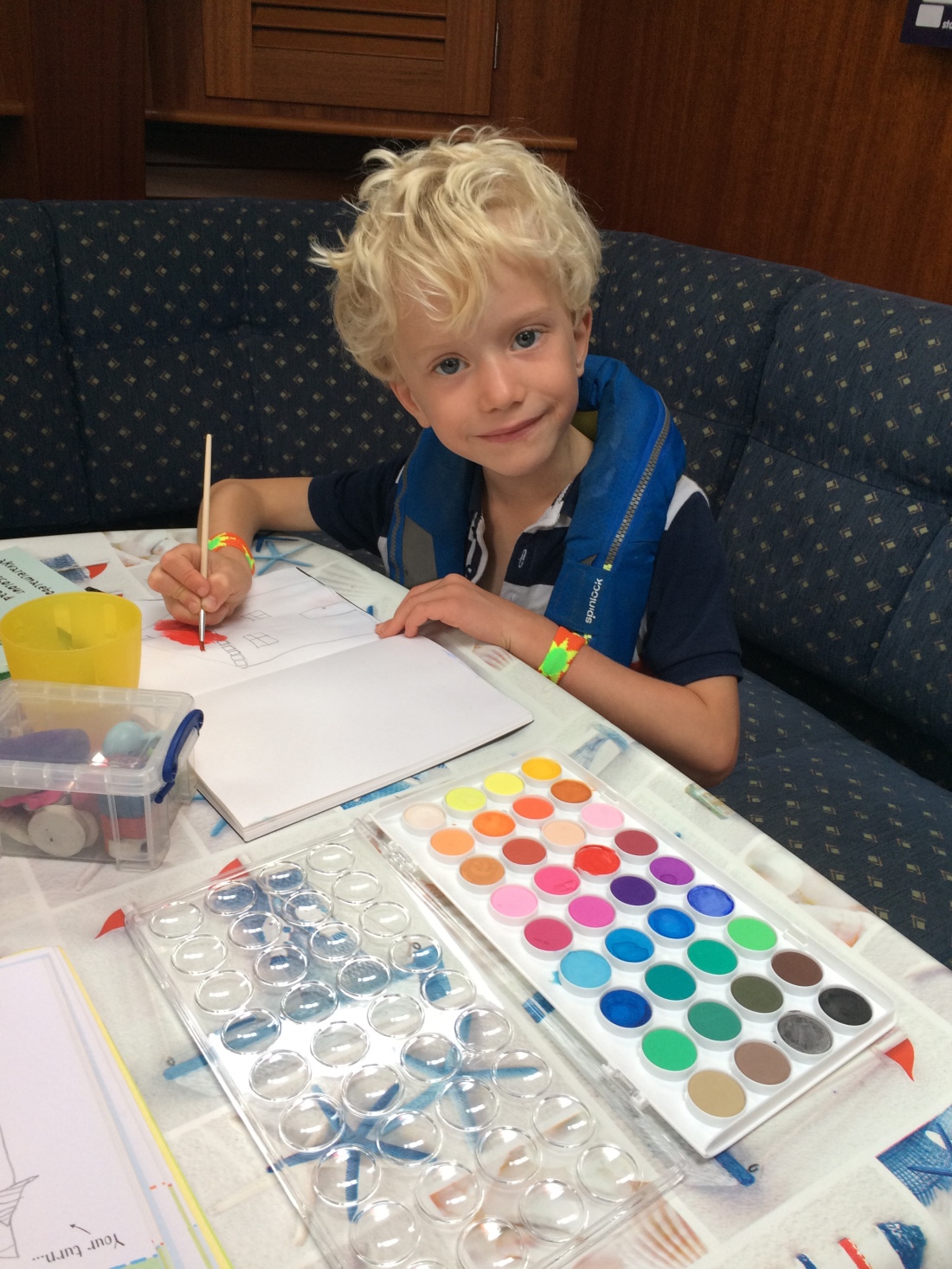 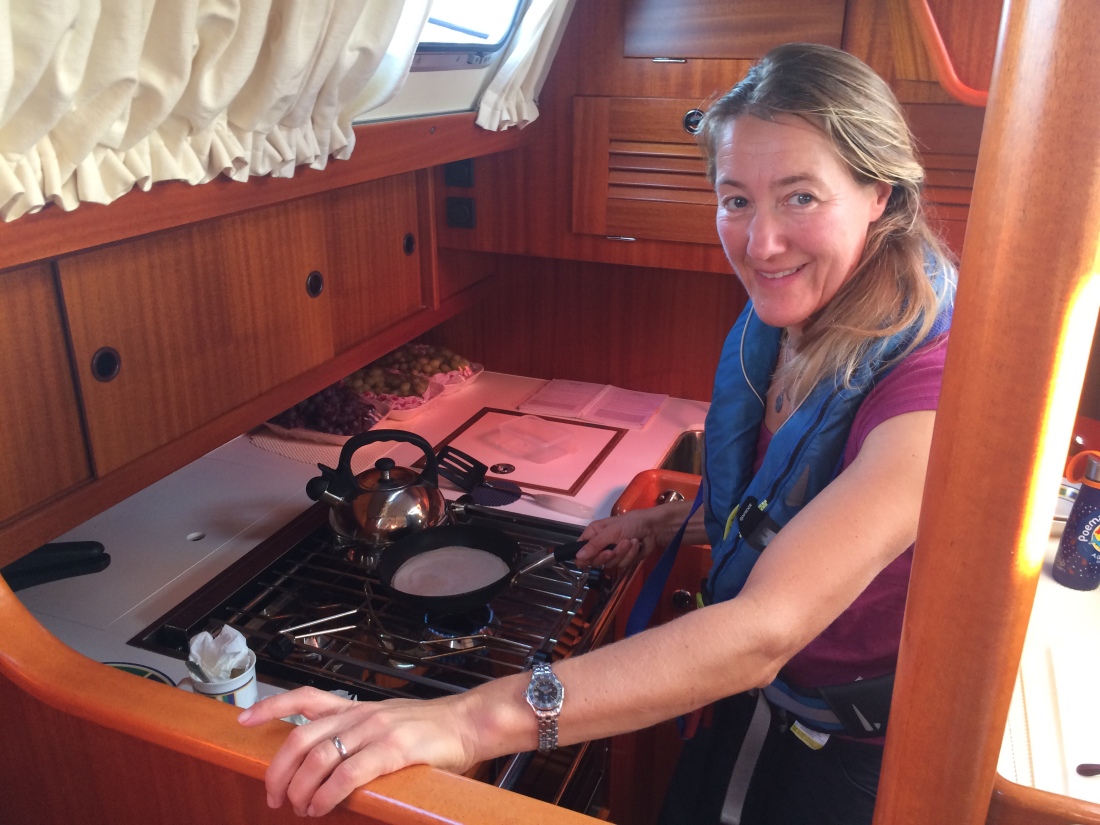 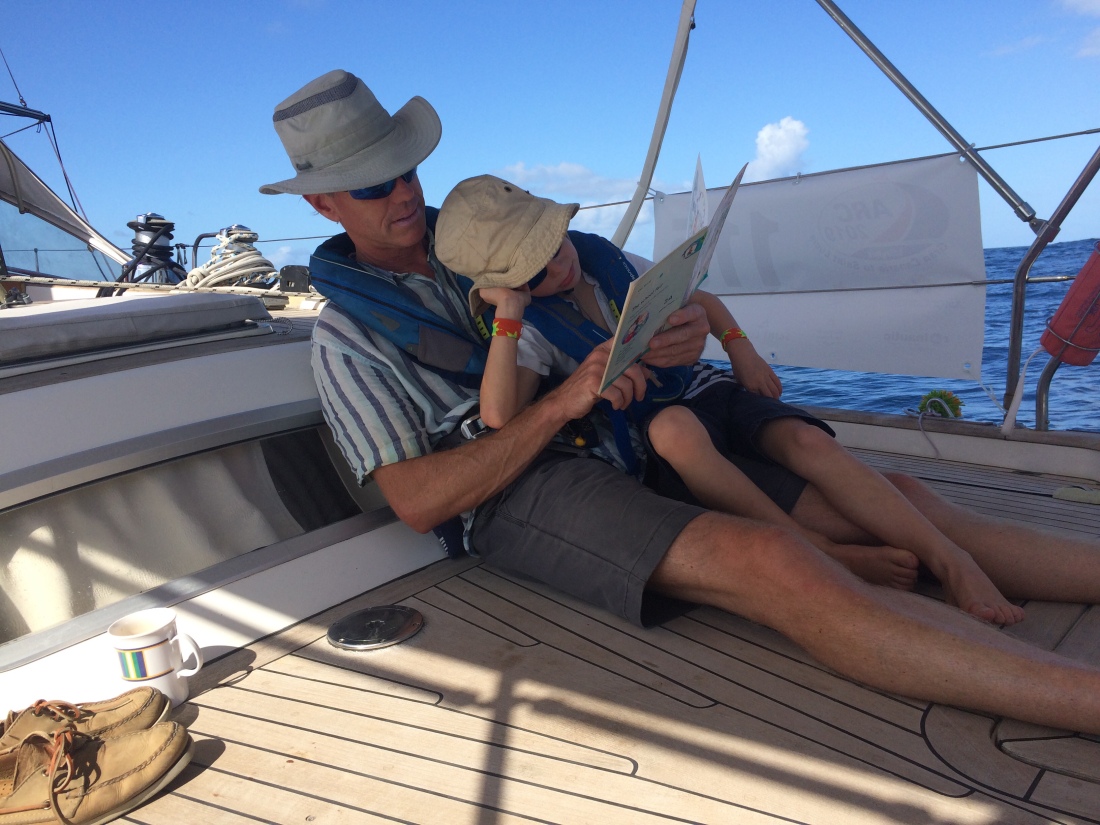